The electrical device in my building and the construction equipment across the street play what I think is a dead-on major chord. I think the truck outside is playing the first and fifth, with the boxy thing playing the third. Music majors please correct me if I’m wrong.

There is a lot of heartbreaking VFX work in this spot, including roto, tracking, matchmoving… Making it look like someone is wearing a hat is a difficult, subtle process that looks faaaaaake with the smallest mistakes.

It took me a while to find video of the full speech, rather than the snippets on youtube. The Nobel Prize website has it here: http://nobelprize.org/mediaplayer/index.php?id=1221

Avid has posted a little tutorial on how to export and import quicktimes “correctly.” After reading it several times, I noticed that the author doesn’t cover what I think is the most important use-case: I would like to export video and not touch the levels at all. And then I would like to import it, and not touch the levels at all. Leave my levels alone! Don’t clip them, don’t make them colorsafe. My job as the online editor is to make the show broadcast-safe, and I don’t need the “help”. When Avid screws with my levels, it makes it impossible to roundtrip between Avid and Shake so I can do vfx work.

Thanks to this article, however, I think I finally understand what the Color Levels options in Avid mean:

If you select 601/709 everywhere you can, Avid won’t touch your levels and will preserve the full range of the image. I have confirmed this by exporting a dozen files with all sorts of settings. I was able to make the process work two ways:

With the Avid codecs, selecting Color Input: RGB clips data off the top and bottom, and selecting Color Levels: RGB squishes the levels to broadcast safe without clipping.

A few weeks back we needed to shoot some greenscreen for a show that is being delivered at 23.98fps (aka “24p”). I’d had problems pulling a key in the past with motion blur at that slow framerate (I prefer 30 for TV work), so I suggested we increase the shutter speed in the camera. The DP seemed more comfortable adjusting the framerate, so he suggested we shoot it at 48 and only use every other frame of the footage. I figured I could write a script to do the conversion later.

We shot the footage, and the next week I sat down to write a python program to convert the material to 24 fps. This could have probably been done with final cut or something, but I don’t know that program so I did it the easy way: play around with the frames themselves using an image sequence (ie, a big folder of numbered tif files, each of which represents a frame of footage).

Normally this would be easy, just take every odd-numbered image. But in this case, although we shot at 48fps, the footage is at 60fps. Why? Varicam works like this: the front of the camera (the shutter and CCD) shoot whatever framerate you choose, but the tape recorder in the camera always records 60fps. Even if you shoot 6fps, the varicam writes 60 frames to the tape — 10 of frame 1, 10 of frame 2, etc. So when we shoot 48fps, there are 60 frames per second on the tape, 48 of which are unique and 12 of which are duplicates.

If I am going to convert the footage to 24p, I need to first remove the duplicate frames (60 -> 48 fps), then remove every other frame (48 -> 24). By analyzing the footage frame by frame, I determined that when the varicam shoots 48fps, it uses the following pattern:

Where 0 represents a unique frame, and 1 represents a duplicated frame (to fill out to 60fps). This pattern is repeated over and over again throughout the footage. (I only just noticed that the pattern is 19 frames long, not 20 like I’d expect, but looking at the footage that’s what it is.)

My python program goes through an image sequence, finds the pattern of duplicate frames, and then copies every other file that is not a duplicate to a new folder as a new image sequence. It makes the following assumptions: the files are .tif files, and “duplicate frame” means “exactly the same size” (not a bad assumption with digital media and tifs). It’s a little hacky, but looking at the resulting 24fps image sequences I don’t see any stutter or dropped frames.

There are some basic checks in the code so it hopefully won’t overwrite precious data, but I make no guarantees.

Chris Blizzard let me know a while back that Red Hat Magazine was coming to the olpc offices to shoot some promotional video, and that they might want to interview me. So I dropped on by after work and gave them some good bites.

They’ve posted the edited video, which is a pretty nice peek into the place where the magic happens. It’s not my best on-camera appearence ever, but luckily they cut away from me pretty quickly 🙂 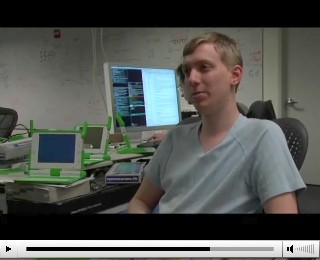 I haven’t seen anyone else linking to this, but the blog Freedom to Tinker is doing a badass academic analysis of the effectiveness of HD-DVD AACS encryption using Game Theory. Rather than simply concluding that the studios are evil and hackers will beat the system, they’ve analyzed the encryption method to determine the optimal behavior for each side.

They come to a fascinating conclusion:

They point out that this resembles the current studio model of release cycles:

Interestingly, this release window strategy resembles the studios’ current approach to extracting revenue from films, in which a film is available first in the highest-revenue format — in theaters — then later in a succession of lower-revenue formats — DVD and television. The idea is to extract more revenue from the most enthusiastic fans in early stages and pick up whatever revenue is available from everyone else later.

There are currently seven long articles about the topic, but they are all worth reading.

This posting is a bit torrent, the file is 16MB. You can read this enclosure with PenguinTV for linux, FireANT for Windows, and DTV for Mac. It’s an AVI with the Xvid codec, so the video will probably play on a Mac with VLC. On windows you should already have the defilerpak codec collection because you download xvid-formatted movies all the time. On linux it just works with totem, xine, mplayer, whatever. 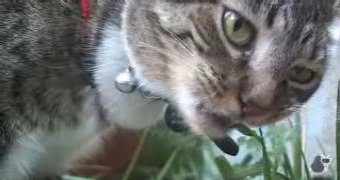