I have no idea if this is just my problem, but I was having a problem where if I compiled anything with gtk, I’d get:

You’ll notice I cheated on this one, there should really be separate entries for Spring and Summer. I had been thinking, all this time, that I had taken three images, winter, spring, summer, and had forgotten fall in ’03. So I made up my mind to absolutely make sure to take a picture while the leaves were down.

Alas, when I got to my machine tonight to put together the completed Seasons series, I found I had not actually taken a Summer picture. And so the series remains incomplete and I’m really annoyed with myself. I’ll go over the directories a few more times hoping to find some hidden directory of summer ’03 pictures which I’m SURE will contain that last image… but in all likelihood this is the way it will remain. It holds up fairly well as a tripdich, actually.

The last picture is dated 10/31/04 — the last time I ever set foot in that apartment. Talk about waiting until the last minute!

I want to edit videos on my GNOME laptop. There are currently a lot of programs out there trying to bring video editing to linux, and they all suck, every single one. Many of them don’t understand basic video editing interface standards, and so they’re trying to reinvent the wheel. Not to mention a total lack of awareness of the basic Avid keyboard layout, which is a necessity if you ever expect a professional editor to touch a new piece of software.

I use video editing software every day, so I know roughly how an interface should look and work. I also know what’s great about the Avid interface, and what can be improved. Because I’m on a mockup binge, I’ve been throwing together some widgets in glade to see what it would look like. I’ve also started thinking about the major components of an editing system (interface, media management, playback engine) and how those could be put together.

It’s going to be a lot of work. A good, integrated video editing application will require working knowledge of gstreamer, gtk, nautilus, firewire drivers, disk management… and that’s just basic editing. Add in titling tools, complex transitions, and motion effect engines and you’re starting to get into some heavy lifting. I know that GStreamer will work as the playback engine, but I don’t know how make gstreamer do 1x reverse playback with audio scrubbing (for instance). I know I would need a couple new widgets, like a ruler-like timecode bar and the all-important video/audio track widget. Also for media management there’d need to be a new “footage view” for nautilus to browse media by source tape and timecode.

Miguel De Icaza once mentioned that there should be a mono-gstreamer video editing program. I wish I could throw something together to get this application off the ground, but I’m afraid that I don’t know where I’d start. Should I try to learn gstreamer? Or do I just get the interface working, and then worry about actually plugging in video files later?

A video editing application, one that is scalable to HDTV and open to the possibility of realtime effects acceleration hardware, is a daunting task — which is why noone has written one yet. I hate being the lame guy who has “an idea” that other people should impliment, but that’s where I am.

Put it this way, if anyone out there wants to write a video editing application, please talk to a real editor before trying to invent your interface from whole cloth. It doesn’t have to be me. Like evolution was based off of Outlook, take a peek at Media Composer or XPressPro and start cloning the interface. Even if we end up with Avid’s shortcomings, at least it we’d get its strengths.

When I was at the GNOME Summit a little while ago, there was a discussion about how to best use the new transparency features of X.org. The consensus was that it’s very hard to use transparency in a way that’s not annoying to a user. Mac OSX used to have their menus slightly transparent, but it ended up looking like the screen had burnin.

I had an idea this morning that transparency would be really useful for drag and drop. I’m always annoyed when I’m dragging a huge thumbnail around that I can’t see under it. You don’t need to see every detail of the thumbnail, so it’s all right to throw the opacity to 40%. You could even do something cute like have it pulsate. Oh look it’s a mockup.

But beyond just making drag ‘n’ drop thumbnails partially transparent, you could also use the transparency to give visual feedback. So if you dragged an image, say, onto an application that doesn’t receive that type of item, like Totem Movie Player, then the thumbnail could get more transparent. This would mean “I’m not going to work here.” This mockup is a little crappy. The initial opacity should be a little more so that the contrast is more evident.

Then if you drag that item onto an application that accepts it, like The Gimp, the thumbnail would become more opaque,i indicating that the application accepts the item. You could combine this with the standard ‘+’ indicator that gets added to the cursor (not pictured).

This would be very easy to do, would look good, and would actually work well.

Char and I moved from Jamaica Plain to Somerville, and I had a feeling that our phone reception would suck in the new apartment. Indeed it does. Furthermore my phone, the Sony-Ericsson T610, is known as not getting the best reception in the first place. Basically, I can’t make or receive voice calls in my apartment without doing gymnastics or running outside. Suck.

So, the hunt was on for a solution to my phone reception woes. I saw three possible solutions:

All of these options required an initial payment, but Skype’s was by far the cheapest. For 10€ you get about 10 hours of talk time. I was worried that, even though there’s a Skype linux client, there would be some problem with my microphone or something.

Skype works as advertised — very easy, no troubles. You have to remember the +1 before dialling an outside number. My dad said that the sound was a little low, so I got a 10$ microphone from Micro Center and hooked it up.

So now I can make outgoing calls with no problem. A note to my friends, when I make a Skype call the Caller ID shows up as “unknown.” So next time you get an Unknown call it might be me. As of yet there’s no way to get incoming calls from a phone. Skype says they’re working on that. For now, it’s easiest to send me a text message or instant message and ask me to call. I can still get and receive text from the apartment.

The rate is .017€/min, which is low enough that I don’t care (micropayments in action!). I don’t use a phone enough to warrant a whole phone line, and trying to boost my cell phone reception is more faith-based than reailty-based.

For the investment I had to make (20$), Skype is a steal. Some people might be annoyed by the lack of phone handset, but I’m a hip young person and I can deal with talking at a laptop.

Here is a panorama I took of the redsox parade the other weekend. The fullsize image is 11530×984 and 1.8 Megs, so be prepared. I used hugin, which is a powerful but awfully-written piece of software. It crashes, it doesn’t make sense, and then just when you’re about to give up it actually stitches together a proper panorama.

Here’s a slice of the image so you get an idea of what it looks like. 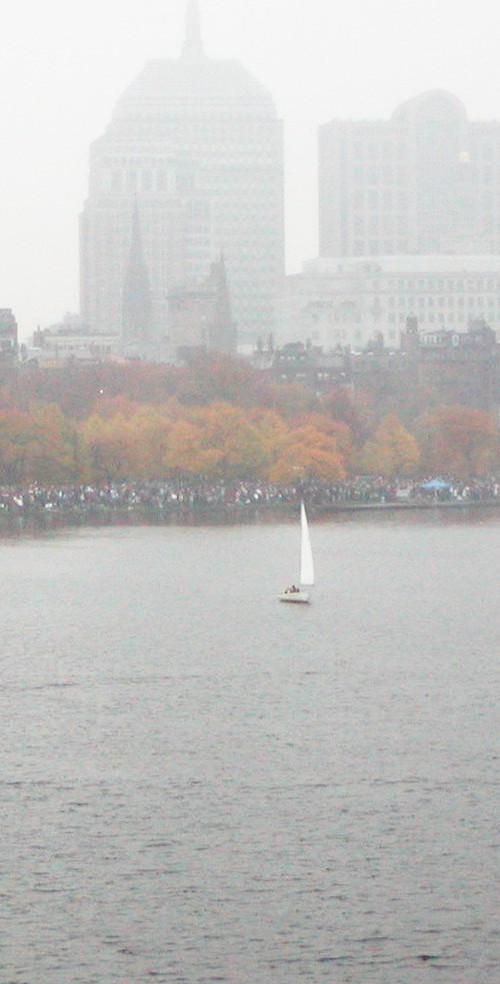 Char and I went to The Great Pumpkin Show in Salem, New Hampshire. It was really fun, and there were a ton of pumpkins. There were two basic types: traditional eyes-nose-mouth pumpkins of various configurations, many of which could have been carved by anybody; and Artist Pumpkins. The technique here involved getting not carving through the pumpkin, but scratching away at the surface. In this way various amounts of light could be let through, resulting in a sort of grayscale effect. They would also shade in areas with a sharpie to make them blacker. All of the “image-like” pumpkins were carved in this way. 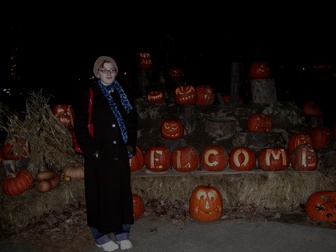 Many pumpkins were scary 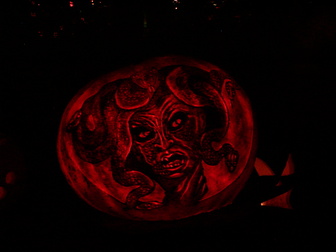 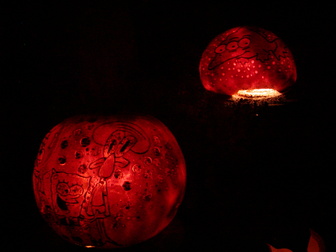 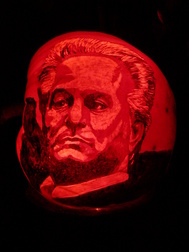 We visited on November 6th, so by then a lot of the pumpkins were starting to rot. Many were still fresh, but many were collapsing. 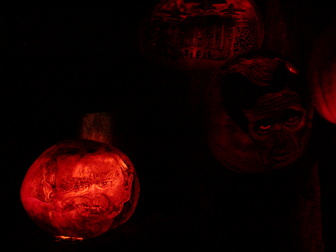 The flash makes things look pretty crappy. I tried about 5 different ways of setting my camera up to photograph the pumpkins, but really I needed a tripod I didn’t have. 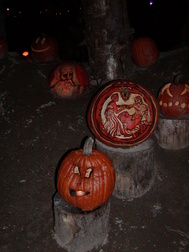 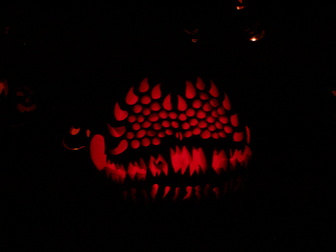 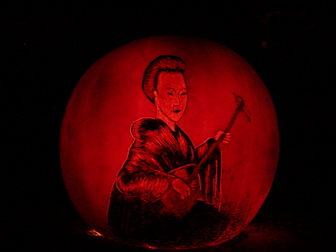 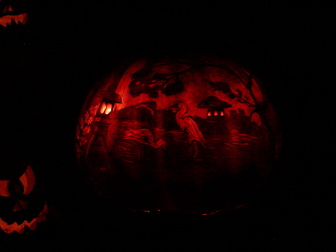 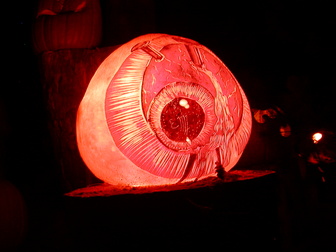 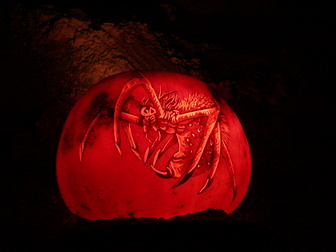 It seems that The Polar Express movie has fallen into The Uncanny Valley. Almost every review I can find talks about the “creepy,” “eerie,” and even “frightening” characters.

At this point, CG animators have to choose between trying to dig themselves out of that chasm or falling back to more cartoony representations, as in The Incredibles. Looking at the diagram of the Valley, it’s an awfully steep climb, so we’re probably going to see a couple more creepy movies with “doll-like” characters before producers and directors realize the technique is flawed.

Today I received my new Alienware Sentia. I got it for the good screen (1280×800) and the availability of a dvd+- burner for less than a thinkpad x40.

Thoughts on the transition:
To move my data from my old Dell Inspiron 4100 to my new system, I actually just moved the hard drive from one machine to the other. I have a 7200RPM 60 gig drive, so it made sense anyway.

When I booted up, I ran kudzu and let it reconfigure everything. That got the sound, USB, firewire, and ethernet working. On the whole I was very impressed with how much was automatic.

Things I had to do manually:

And that’s it. I have wireless, video, sound, and I have to test cd burning, but that’s it. Under an hour of poking and my whole system is moved to a completely new laptop. I don’t think I could have done it any faster on any other platform.