I don’t think I would have canceled cable if I hadn’t basically been forced to. I’m still using MythTV as my DVR, and it works well — when it can capture video. Two years ago I was capturing HDTV using the little-known firewire output on our HD cable box. Then RCN turn encryption on all the channels, and I had to go back to analog SD cable capture. Early this year, Comcast announced that they’d be turning off the analog channels, except for the most basic broadcast stations. That meant cable would become almost completely useless to us, my MythTV can only record analog SD and we never watch live TV.

Since most of the shows we watch are either a) available over the air, b) available legally online, or c) available other ways1, we couldn’t see the point of spending 40$/mo on top of our internet connection cost for TV.

I bought a 30$ powered antenna at Target, a 100$ HD capture card for my mythtv, and we’re now back to recording and playing back HDTV.

A long while back I found out that mythtv supports capturing video over firewire. The idea is that as long as one has a cable box where the jack is turned on, it will spit out the complete video and audio signal for whatever channel you are currently watching, even if it’s HD.

Although I didn’t think my current mythtv machine (Athlon 1700+) would be fast enough to play back HD, I could still use the firewire connection to change channels instead of my current unreliable IR method. I bought a cheap firewire card, and it worked. So I knew that, one day, I could upgrade the machine and get full HD.

So recently, I dropped 350$ at newegg.com and bought:

The upgrade was pretty smooth. Here are the steps.

It took a full, busy day, most of which was spent copying the old data and trying to get firewire to work. Everything else was pretty low-impact, including such previous headaches as installing mythtv and configuring mysql. It’s still way too hard for the average user, but at no point did I feel like I was breaking a sweat. I’ve spent a lot of time with mythtv so I know where a lot of the “unbreakme” buttons are. I know I have to set this up, or tweak that option… things that should be defaults but aren’t. I’d say 90% of the difficult stuff was because I was transferring old data and had permissions issues. If this was a new install, the only blocker would have been the firewire issue.

All in all, a day well-spent, and now I can record and play back native HDTV streams like they were youtube videos. It’s been a long time since I’ve been able to spread hardware all over the floor. 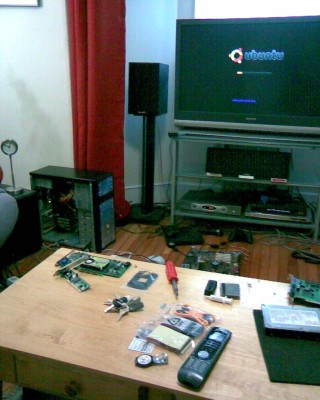 Did I mention this cost me 350$? Compare that to the competition.

A footnote to my work on my mythtv machine: Newer nvidia cards have amazingly well-supported tv output, so you can safely ditch crappy VGA to NTSC scan converters. Check the nvidia readme for the supported cards, and use the nvidia-settings tool to fine tune the picture. You can drag a slider bar and change the overscan as you watch!

There are certain aspects of my mythtv PVR system I’ve been unhappy with. They are:

Hums are usually a sign of an Audio Ground Loop. If two electronic components are at slightly different potentials, usually because they are plugged in to different sockets, an audio cable will actually create a complete circuit. A small amount of charge flows between the two components, and you hear a hum out of your speakers. Radio Shack makes a cheap doohickey called a Ground Loop Isolator that solves the problem.

Unfortunately whenever I tried using the Ground Loop Isolator, I would hear a different, even more annoying squeal. So for a while I lived with the hum. Today, after some experimentation, I discovered the the squeal occurs because the onboard sound jacks are close to the monitor plug. If I disconnected the monitor cable, the squeal would change! So I bought a 24$ sound card on clearance, positioned it far away from all the other jacks, and now there are no annoying noises coming out of the speakers.

As for the video problems, my PC->TV converter was the cheapest possible model. The next version up from the same company solved all the problems. The one I have now is a Grandtec (like my old one) but it has a little remote, supports more resolutions, and outputs to component as well as svideo. It seems scan converters is one place where it does no good to get the cheapest option (unlike 24$ sound cards).

Anyone who watched either the Democratic debate last week or The Daily Show’s coverage of it this week got to enjoy a Dennis Kucinich Moment. Specifically he was shooting down Dean’s promise to balance the budget with a well-delivered 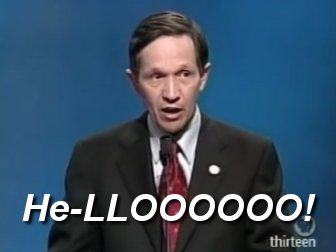 Thanks to Mythtv, we can now have this sound clip for our enjoyment. Use in your instant messaging program, or perhaps as an email notification. The possibilities are endless!

After a couple months of playing around with mythtv, I’d qualify the experiment as a total success. It records shows perfectly (ok, occasionally misses the first 15 seconds), plays them back, manages them, etc. I can extract the shows, convert them, burn them if I want.

In my last entry, I mentioned the only remaining problems are slow channel changing and occasional crashes. The only other problem I’ve had is frame jitter, caused by the difficulty of converting progressive vga to interlaced ntsc.

Well the channel changing is always going to be slow, but I’ve been keeping up with the development version of mythtv, and it almost never crashes now. Rarely the frontend locks up, and almost never does the backend die. And now there’s experimental code to try to reduce the frame jitter, and it works really well. I call it the CNN Test — is the crawl at the bottom of cnn smooth or shaky? With the new code it’s not perfect, but it’s a lot better than it used to be. It’s much easier to forget I’m watching output from a computer now.

The mythtv team writes some amazingly robust, quality code. The install process, however, is still ridiculously hard for anyone other than an experienced linux guru. There’s not even a configure script that tells you if you have all the pieces installed! Take a look at the 2000 page install script sometime, you’ll see. Naturally video capture is a delicate art, so there’s a lot of ground to cover, but the actual software installation of mythtv could be streamlined greatly. Hopefully one of the TODO items for 1.0 will be some sort of easy installation.

Of course it wouldn’t have been any fun if it hadn’t been challenging. Henry likes to complain about my computers, he has since I’ve known him. This is not his fault, I just tend to do weird things with my machines that make them behave differently than most people’s machines — therefore, they are unfamiliar and weird. Mythtv, however, is a very smooth, invisible system. I don’t think he can complain about much of anything (except the channel-change speed — that man weilds a remote like an automatic pistol).

Last gripe: mythtv doesn’t stop recording if the disk is full. this causes big problems and crashes. come on people.
this has been fixed in newer versions.

pps: The writer of the Tivo Hacks book recently advertised his services to build mythtv machines for 1200$. Given my experiences, that is way more money than necessary. I’ll do it for 750$.

I have now used my mad skillz to use two infrared devices at once. This may seem arbitrary, but what it means is that I no longer have to point the remote directly at the receiver in order to change channels. It now works clear across and into the kitchen with no trouble (except that then the text on the tv becomes hard to read at that distance).

The only functionality still missing is reencoding shows to a format I can watch later or burn to a cd, but I’m fairly sure that will come around. For now the system is at a point that I feel I can recommend it to friends, as long as they keep in mind a couple things:

The replacement ram for my tivo machine finally arrived. When I first put that machine together, it crashed and crashed and I could not install the operating system. Now with this ram I can put it together again and see if the problem has been solved.

I have this sick feeling in my stomach that, in fact, the problem has not been solved and this fucking thing is still going to crash. Please pledge your support by replying to this and wishing me luck!
END_OF_DOCUMENT_TOKEN_TO_BE_REPLACED

I’ve made some good progress in getting the Tivo machine to work. Once again the gory details are in the extended entry to spare the people who expect pictures of cats.
END_OF_DOCUMENT_TOKEN_TO_BE_REPLACED

After a lot of headaches and trying to get various parts to work, I have to alter the pricelist a bit.
END_OF_DOCUMENT_TOKEN_TO_BE_REPLACED