Uh oh, apple released a new ipod today, looks like all you addicts will have to open your wallets again! I’ll give them credit, no other company could get people to spend six hundred dollars on a music player / teeny tiny photo viewer.

I had incredible problems trying to get m3u playlists working. Basically the machine would crash if I tried to load a list of any decent length.

It’s midnight, and horns are honking outside my window. There are random screams of joy. The air is electric. I can’t believe we did it.

Jon Stewart appears on Crossfire, and launches into a scathing attack on political theater, partisan hackery, and damaging devisiveness.

Download the torrent, tell your friends. Everyone should see this.

Tucker Carlson: “We’re not here to confront you, we’re here to love you.”
Stewart: “I’m not. I’m here to confront you, because we need help from the media and they’re hurting us. … To do a debate would be great, but that’s like saying pro wrestling is a show about athletic competition. … You’re doing theater, when you should be doing debate. What you do is not honest. What you do is partisan hackery.”

Pricewatch.com has always been a great resource for finding cheap prices for computer hardware, but it always had a basic flaw — the cheapest prices are usually offered by the most disreputable vendors. So browsing pricewatch required a combination of correlating its search results with resellerratings.com to see if the person selling the item was any good. 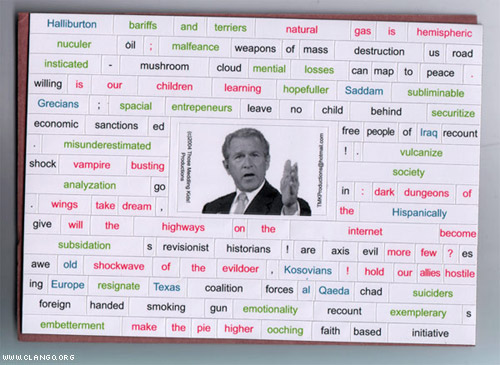 Every so often I’ll post something you can yum install that is neat or hip or something. Debian people are probably laughing at me now, but the point is not that yum is easy like apt-get, but that there’s a lot of cool software out there that goes unnoticed. Being able to try it out with a simple yum install just makes it easier to experiment and play around with your desktop.

For instance, yesterday I discovered mplayerplug-in. For a while embedded videos in web pages have been a problem, but no more! Mplayerplug-in is a mozilla plugin that adds support for a whole raft of videos, like quicktime and wmv. It uses mplayer (naturally) for its backend, but it also features advanced high-tech state-of-the-80s gui elements, like “stop” and “rewind.” For mplayer, this is a big step, and it brings a tear to my eye.

Note that another popular plugin is mozplugger, which also tries to add mplayer support for mozilla. I don’t know what happens when the two collide, so you should edit your /etc/mozpluggerrc and remove the lines that talk about video. Then remove your ~/.mozilla/pluginreg.dat so that the next time you launch mozilla (or a mozilla-based app) it will properly reread the mozpluggerrc.

Mozplugger is great, and I can go to apple.com/trailers with the confidence that movies will play and my friends will be impressed.