A year or so ago I helped Char finish off some noodles from a thai takeout place. The dish had shrimp it, but I don’t like shrimp so I didn’t eat any. Right after dinner, I noticed my lower lip had puffed up to twice its normal size. I’ve never been allergic to anything, but this was clearly a reaction so I decided to lay off the shrimp.

Last night, Char and I had salmon, and three hours later I noticed my eyelids were starting to swell. I was confused and tried a cold pack, but when that didn’t work I decided to sleep it off. But then I had trouble sleeping, so at 1:30 I checked the mirror. This is pretty much what I saw:

OK so it wasn’t quite that bad, but the skin around my eyes was extremely puffed up, swelling one eye somewhat shot. So, I woke up Char, and we were off to the emergency room.

The doctor agreed that this was probably an allergic reaction, and that my body has now, thanks to the earlier shrimp incident, produced masses of wonderful shrimp-killing antibodies that are just looking for something shrimpy to destroy. Although I didn’t actually have shrimp last night, I probably got exposed through the salmon, most likely by the guy at Whole Foods not changing his gloves before serving me. (Whole foods had a huge display of shrimp skewers, so it’s likely he’d been skewering shrimp before I go there.)

So now, it’s not just a matter of avoiding shrimp. Now I have to be the dork who demands extra assurance that my seafood hasn’t been anywhere near shrimp. As of now, I’m not allergic to anything else that I know of — I had had scallops the night before without incident. But given the severity of the reaction, it’s not improbable that the allergy could spread to other shellfish. Sigh.

“Next to the name of one regular, who has a habit of bringing in women he is not married to, is an instruction to make sure the man’s wife has not booked a separate table for the same day.”

The great thing about the Times is, even when their articles are hopelessly behind the curve (you mean you can reserve a table OVER THE INTERNET???!!), there are sometimes little nuggets of gold on the inside. The best of these come in the form of revelations about how “the other 1%”1 live. In this case, we learn about a man who is so rich, his restaurants help make sure his wife doesn’t find out about his regular infidelities. I’m lucky if the person at the Qdoba realizes I’ve been ordering the same thing once a week for two years!

I haven’t had this much fun learning about rich people since the Escapes article in which one fellow has a summer house in Phoenix that he keeps permanently air-conditioned so it would be cool if he decides to visit.

At FUDCON 2007, someone brought a Buddha Machine, aka Buddha Box. It was very cool, and I was pleased to see that the sound tracks are available for download.

However, Track 1 has some nasty high-frequency distortion in the wave file that renders it extremely not zen. I decided to run a filter over it to clean it up, and turned to my usual go-to sound program (which I dislike) called Audacity. Audacity wanted no part of Buddha:

So I turned to the new kid on the block, Jokosher. It actually worked quite well. Sometimes it was difficult to know when to right click, when to left click, and when to doubleclick[1], but once I figured that out I was able to apply a lowpass filter and an EQ to clean up the audio. I feel much calmer now.

These files (transcoded to ogg with oggenc) play great inside my sonata activity on the olpc. Add one of the files to the playlist, right-click the playlist and select "repeat."

[1]answers: Right click on timeline of audio file instrument to import file; doubleclick on an effect to open effect properties

I like evolution, I really do. At least that’s what I tell myself. I’ve used it for about six years and I’ve never once lost my mail, so I try to give it the respect it deserves. That said, this bug is totally lame. Basically, when using message filters, any actions after a “move” action are not performed. There is no documentation on this, no warning in the UI, and no indication that there is a problem at all. Instead messages mysteriously don’t get filtered correctly.

I know everyone has their pet bugs, and developers hate people with pet bugs, so I’m not going to press the issue. But I really think there should be some indication in the UI that “move message” is a final act and that nothing can happen afterward.

It just goes to show that you shouldn’t think about one thing while typing about something else. In a recent email, I meant to type “Between” but my fingers got as far as “Networ” before I realized I was way off.

I swear I didn’t make this up 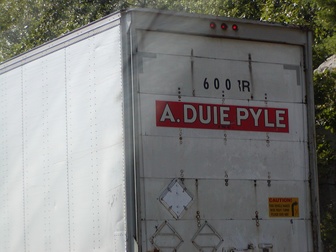 How do you think it’s pronounced?

I was reading Norwegian Wood tonight, but found myself uncomfortable. It was too quiet, I guess. To create some soothing white noise, I put on Boodler, a soundscape generation program. Using a library of samples it creates different sonic environments, like train tracks or rainstorms.

After about ten minutes the storm swirling in my speakers was beginning to pick up. At this point in the program, the wind increases a bit, the thunder occurs every 7-15 seconds instead of 20-35, and the script introduces the LightRain module. The sequence lasts for 7.5-11.5 minutes.

At the same time, I realized that I could just hear the soft patter rain outside my window. I immediately turned off my fake, artificial storm, and threw the windows wide open to better hear the real thing. Almost as soon as I had done so, however, the patter faded slowly down, and was no more. All that was left were the occasional drips on my window fan, cars creating waves in puddles, and a television in the apartment below mine.

So, I restarted my program.

Some people seem to think I want to buy every new gizmo that comes out. That’s only somewhat true. I do love following development of pdas, phones, laptops, and such, but I only seriously consider purchasing something when it has satisfied certain conditions. For instance, I’m not going to actually get a new phone until it has:

I expect this will take a year or more, seeing as the 400$ phones aren’t even up to this standard yet.

As for a laptop, I’d want at least six hours on a battery, and a graphics chip capable of Doom III, and under 1500$. Again, not going to be for a while. 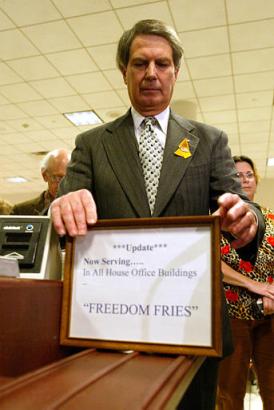 Today, congressmen will eat Freedom Fries in the House of Representatives’ cafeteria, and all I can do is laugh nervously.

ps: I’m going to be posting the links with which I would normally assault my friends on AIM here instead. The ratio of text to pictures is going to go down, but hey, no more link spamming.

I’m pretty new to the pathetic self-centered world of the bloggosphere. There are a few classes of blogs. Let’s break out some html.

99% of blogs are livejournal E/N drama pieces of shit. This makes sense, because it’s very easy to update a site that’s about you. Teenagers are the primary authors of these sites because all their friends will read their site, their parents won’t, they loooove themselves and they have lots of freetime.

Like anything else, a way has been found to use stupid blogs to form cliques. I give you the Nonuglies, a collection of livejournal users who choose who is pretty enough to be included among them. As an ugly nerd who now writes his own blog that is straying dangerously toward E/N crap, I react two ways: 1), that’s sort of sick and mean, and 2) who the fuck cares.

I don’t see this as the end of civilization or really anything new. I refuse to say “kids these days” or whatever. Assholes will be assholes at any age. Just because there’s a new, public medium for assholes to flaunt their assholeness doesn’t mean anything has changed. Put it this way, they can have their space, and I will have mine. The internet is a huge place, and it’s very easy to not even know about sprawling subcommunities until someone clues you in. Like Blogs.

Ah yes, did I mention there’s a link harvesting site that tracks crappy blog drama? There’s a niche for everyone I guess.