My bicycle route takes me out of Medford, through Somerville and Cambridge, and then across the Salt & Pepper Bridge into Boston. Crossing that bridge is like turning a video game up to Hard Mode — all the bike lanes disappear and suddenly there are double-parked cars to contend with. I ride fully alert and very defensively, so if a cab cuts me off taking a right turn I’m rarely surprised.

Today I biked in and, as always, it was smooth sailing until I crossed that bridge. On Congress Street there was a black SUV in front of me moving slowly and straddling two lanes. I could see through the rear window that he was on a cell phone. I employed my usual strategy and backed way off, giving him space to drive erratically, but he was moving so slowly that I had to pass him or stop. He drifted over toward the left lane and seemed satisfied with that choice, so I started approaching him on the right.

That, of course, is when he saw some sort of traffic ahead, slammed on the brakes, and took a hard right into my lane. I hit the brakes, which my bike has because I like being able to stop quickly. On the scale of 1 to 10, 1 being a light tap and 10 being a death grip, I had to apply about an 8 of pressure. Alarming, but not life-flashing-before-my-eyes. I’m stopped, he stopped, there is honking behind us.

(You may notice that so far we are in Regular Universe Boston.)

I’m someone that never honks in traffic because by the time I realize I should be honking the other asshole is already halfway down the block. But today I gave that guy the biggest finger ever and a loud FUCK YOU to go with it. And he saw it. At that point he did not try to run over me, so I was already feeling good about myself.

I took off, and soon a car pulled up alongside me with the window rolled down. I was ready for it: you asshole bikes shouldn’t be on the road, get on the sidewalk, etc etc. Instead I heard:

“Did you see that guy? On the phone! I don’t know how you guys do it.”

Then another cyclist rode up alongside me and checked to make sure the guy in the car wasn’t giving me static. I said something like “He’s being a good guy!” I found it hard to find words to express that the guy in the car was “being nice.” This is a very foreign concept and my language seems to have difficulty expressing the idea. The cyclist said the asshole in the SUV pissed off like three more cars behind us, and all that honking was definitely for him.

If a cyclist can get cut off — while passing on the right no less — and still get support from other Boston drivers, I have to wonder if I’m in the right universe.

I recently went to a DJ show at Good Life, and since these shows usually last longer than the T runs and I also hate cabs, I decided to bike both ways (about 5.5 miles each way). It had been flurrying all day, but there wasn’t enough snow or ice on the roads to make me worried about wiping out.

One factor I hadn’t considered, however, was road salt:

I’ve wiped as much of it off as I can, but it’s too cold to wash the bike (it would probably just freeze). My hope is that the chain isn’t ruined and my components aren’t all going to rust. Ah well, the show was fun.

Travelling from Braintree, MA to North Truro with Mike MacHenry.

Details to follow, including video clips from the ride.

“Next to the name of one regular, who has a habit of bringing in women he is not married to, is an instruction to make sure the man’s wife has not booked a separate table for the same day.”

The great thing about the Times is, even when their articles are hopelessly behind the curve (you mean you can reserve a table OVER THE INTERNET???!!), there are sometimes little nuggets of gold on the inside. The best of these come in the form of revelations about how “the other 1%”1 live. In this case, we learn about a man who is so rich, his restaurants help make sure his wife doesn’t find out about his regular infidelities. I’m lucky if the person at the Qdoba realizes I’ve been ordering the same thing once a week for two years!

I haven’t had this much fun learning about rich people since the Escapes article in which one fellow has a summer house in Phoenix that he keeps permanently air-conditioned so it would be cool if he decides to visit.

Ever since I read about the infamous Tour de Nat challenge, I knew it was something I wanted to do. In August, I will do it.

I have the bike and I have the system, all I need now is a body capable of the task. So a few weeks ago I started riding every weekend that the weather was good, of which there has been only one.

This is the route I took two weekends ago: 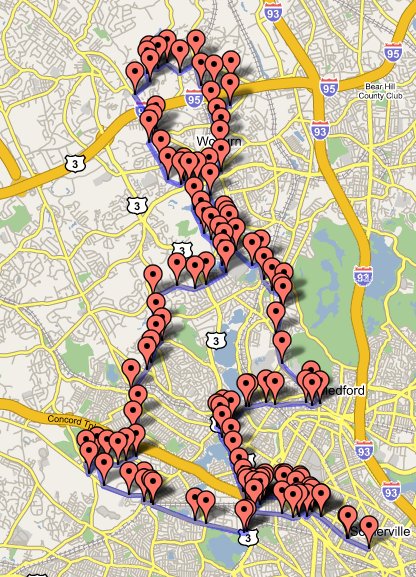 The link takes you to the mapping site I used. Load this GPX file to see the route up close. The route was quite good, although the first hill in Belmont at waypoint 15 kicked my ass.

I’ll be posting all of the routes I take on my way to Tour de Nat 2006, but I can’t guarantee quality choices. I don’t have years of experience to rely on, so I’m using a combination of google maps and google earth to pick my roads. Google Earth sucks for determining elevation, however. I’d prefer a real topographical map. I’ll be steadily increasing the mileage until I can do 60 miles reliably. Come August, I should be ready.

My friend Mike and I went bike riding two weeks ago using a route from a book. This was awkward because each of us could only retain three or four instructions at a time (“right? left? Mountain? Peach Orchard?”). We had to check the map so often that progress was slow and uncontinuous. Ah, but for a handlebar-mounted gps with mapping! 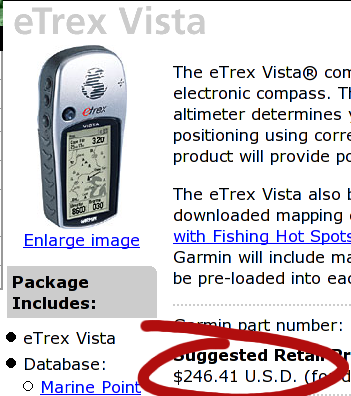 So I did some googling, and discovered that someone had made some Garmin-specific files of Boston area bike rides. Char and I own the cheapest Garmin, the eTrex. No mapping, no magnetic compass, no altitude, just location data and route information. I got it at target thinking we might do some Geocaching, but we haven’t done any yet. The problem was, how to get the maps into the GPS? 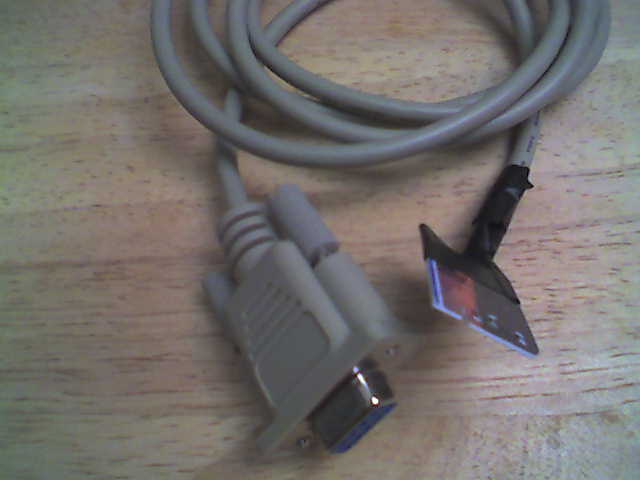 Cheap-ass serial cable! I learned that the data port on the Garmin is simply a serial port: Rx, Tx, Ground. Wire those terminals to a 9 pin serial connector (everyone has a 9 pin serial cable lying around in a drawer somewhere of course!), and you’ve saved yourself $38.00. My cable isn’t very well made and could use a little solder to improve the connections, but right now it works well enough.

While it’s nice to use other people’s maps, I really wanted to create my own. As you can see by my previous post, the solution was handed to me on a silver platter, as was the problem of format conversion and linux-based uploading. This weekend I created a short map on the website, uploaded it to the GPS, and Char and I followed the path around the neighborhood. The problems I noted after that walk led to the development of the python script I wrote.

The last problem was the one I had been avoiding thinking about: mounting the GPS on my thick handlebars. The sanctioned mounting kit fits handlebars of one-inch, but mine are larger. After some fiddling, it appeared that I might be able to attach the device to the stem of the bike. Maybe zip-ties could do it? 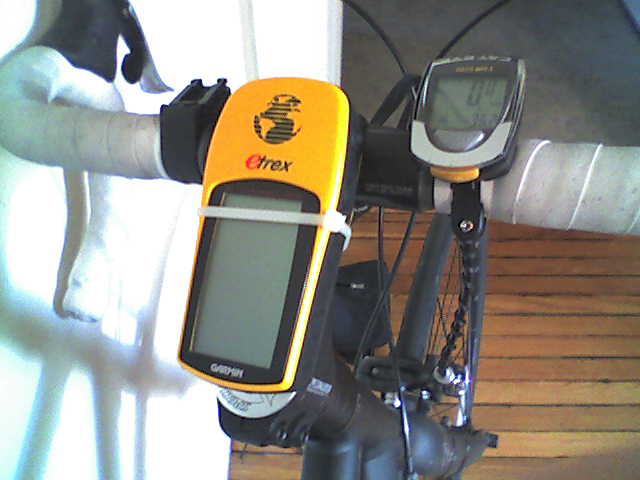 Yes! And in the event of catastrophic zip-tie failure, the lanyard is secured to the stem so the GPS doesn’t go careening to the ground.

Had I gone the “legit” route, I would have paid:

And that’s not counting the price of windows! (:P)

Which I think is a better deal, even if I have an ugly cable and worry-inducing mount. I bet the map-creation interface is better, though :). You could go even cheaper by getting a used eTrex on ebay or craigslist. I hope to take the whole contraption on the road this weekend. The one big feature I might miss is the “beep on upcoming waypoint,” but the screen is large and clear so that shouldn’t be an issue.

This is an expansion of the excellent work done by Mr. Davis at his Open Source GPS HOW TO page. He has a google maps hack here that allows one to make a GPX xml file by clicking on intersections. This is a very quick way to make a route map.

I wanted to expand on his work in two ways:

I wrote a python script that does both things. All one has to do now is:

gpxrecode removes the leading number and hyphen from the waypoint name. If the waypoint is blank it gives it the same name as the last one. If the waypoint is already in a cache of waypoints, it adds a number to the end of the name. The cache is maintained between runs of the program, so multiple routes shouldn’t clobber each-other’s names.

Source after the break.