Char found a rice car in Madison that is pretty funny. Along with the usual giant spoiler, this one has
the added fun of Very Silly Kanji. The characters in the lower left read "Honda." Which makes sense, I guess, although even the Official Japanese site of Honda simply
uses the English nearly everywhere on its page. That, and I never saw a car in Japan that had Kanji on anything but the license plate. But if you’re going to put an unnecessary spoiler on your car, you might as well also throw in some unnecessary kanji.

I’m not sure about the kanji on the rear windshield, I think it reads 風え速. Unfortunately that’s not a word I can find in the dictionary. Now 風速 means wind speed, which is silly, but I think the idea is "fast like
the wind." I’m not sure what the middle character is. 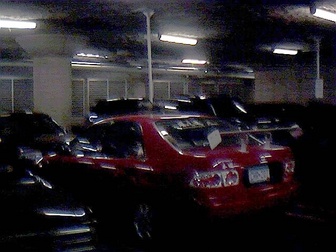 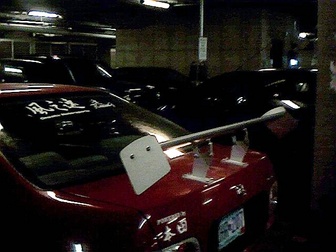 Char’s camera doesn’t have a flash, so under low light it takes some very interesting grainy pictures.