This year I went again to NAB, the annual convention for tv, film, and radio. Since Las Vegas is warm and sunny, Char thought it’d be fun to come along and take some vacation time while I checked out the show floor.

For this trip I did not bring my Thinkpad, opting instead to bring just my olpc. Although Char complained about the spacebar (fixed in b3, Char!) and its slowness (also fixed, Char!), it performed phenomenally. It easily picked up all the access points I needed and connected to them quickly. The web activity also handled any accesspoint payment sites perfectly. On one occasion when our cheap(er) hotel didn’t have free wifi, I was able to connect to the Best Western two buildings over and use theirs instead. It must have been 1000 feet away and still the signal was strong. Bravo olpc!

After I filled my brain with details about Final Cut Pro upgrades, digital asset management software, and other expensive new stuff, Char and I drove out to Arizona to go camping at the Grand Canyon.

Camping was cold, but we were prepared for it. The next morning we woke up and saw some very tame deer strolling through the campground 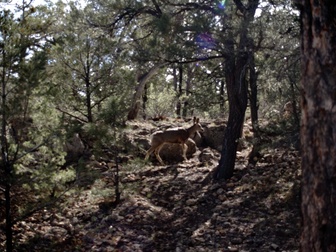 We had a whole day to spend at the canyon, so we donned our boots (Char bought hers a few days before) and took a hike. Interestingly, by default the Park Service does not provide very accurate maps which discourages morons like us from making up our own routes and getting in over our heads. Instead they offer a few basic trails with regular checkpoints to keep it nice and easy. I’m glad we talked to the park service lady, she recommended a very good hike. 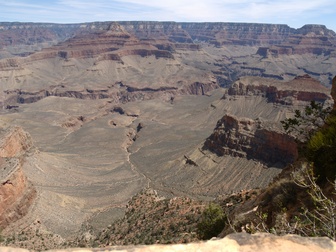 The Grand Canyon is incomprehensively big. There’s just no reference to get any sense of scale, and because the opposite wall is 10 miles away you can’t see any other angle of it because you can’t get any paralax. It’s just huge and unmoving. 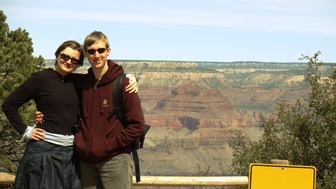 It was also eerily quiet. Char and I were trying to figure out what we expected to be hearing other than the grandiose symphonies and echoing eagle calls heard in gift shop videos. Although the day before had gusts up to 50mph there was very little wind when we were there, and because there are so few trees (it’s mostly shrubbery!) there was no rustling of leaves. There were also hardly any songbirds twittering away. Most of the birds were gigantic crows that wanted to eat our food. 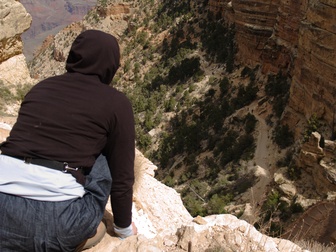 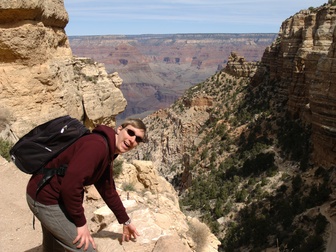 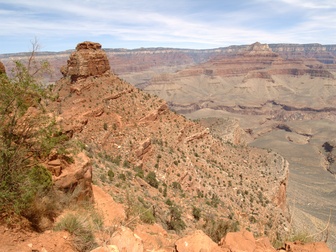 The trail we hiked was also used by mule trains which, according to my ear, nose, and throat doctor, carry supplies down to Phantom Ranch in the canyon. The men leading the mules were totally cool and legit. Real cowboys. Or I guess muleboys? 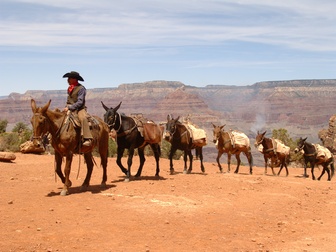 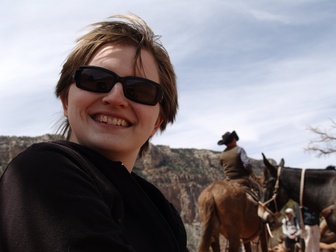 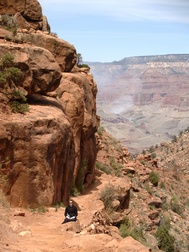 As you can see in the above photo, there was some smoke drifting out of the depths of the canyon that didn’t look right. Someone on the trail asked one of the cowboys what he thought it was, and he chalked it up to the park service “doin’ a controlled burn, and they lost control of it.” I am not doing the accent justice here. Try to imagine what Dubya wishes he sounded like when he clears brush. 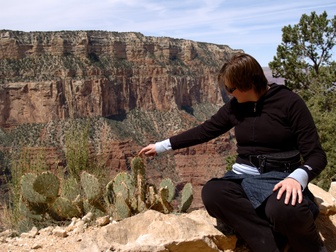 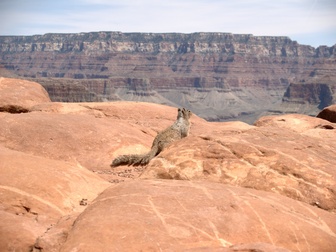 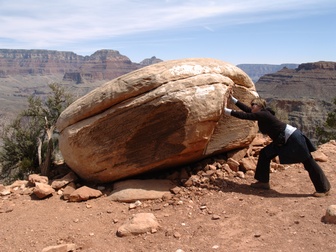 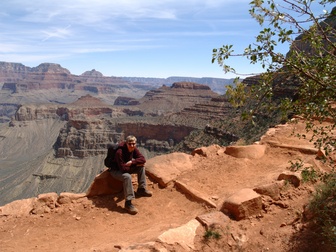 Our descent ended when we could finally see the river for the first time near the omniously-named Skeleton Point. 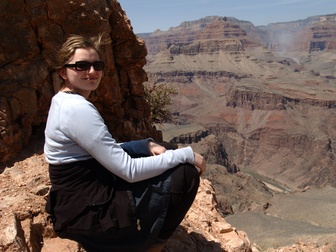 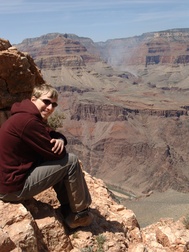 After eating our lunch, we started on the way back. There are not many pictures from the way back, not only because it was the same view, but because hiking back up 1800 feet is hard work! As we neared the top, though, another hiker pointed out a few condors hangin’ out on the rocks 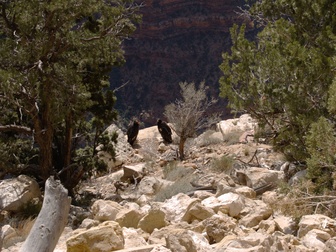 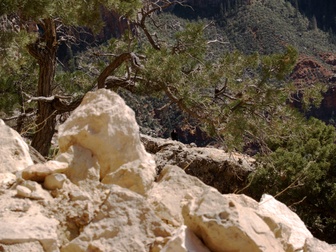 As we got back, we realized if we camped again that night we would not have a chance to shower again for the whole trip. This would mean we’d have to drive back to Las Vegas smelly, see Bill Maher perform at the Hard Rock the next night smelly, stay up all night and wait for our flight smelly, and then fly home smelly. Also, it was supposed to be 22 degrees that night. It was only 30-35 the previous night, and that was cold enough, so we bailed and got a hotel. It was the right thing to do, especially since we were only out 18$ for the campsite. A shower and a good night’s sleep were greatly appreciated by all.

The next day we visited the Hoover Dam, but those pictures will have to wait until tomorrow.

A few webcomics have bonus jokes in the title attribute of the image tag, meaning you don’t see the joke unless you hold the mouse over the image. These easter eggs necessitate new and glorious extensions just to make them work properly. Often the bonus joke isn’t all that great, but oh man, sometimes it’s funnier than the original punchline.

After discovering this trick in a webcomic I’ve been reading, I have to go back through the entire archives of a comic strip reading all the new jokes. Downside, or bonus?