oooooh. This is a mac mini clone with linux-friendly hardware. If there was decent software to stream music over wireless, it would make a great kitchen PC. Or since it has ethernet and wifi, it’d be a great little home server. There’s always a need for little servers and firewalls, and this looks like a great choice for those uses.

Today I wasted a lot of time on a Computer Maintenance Issue. I haven’t had to do this in a while, so I thought I’d document the experience for posterity.
END_OF_DOCUMENT_TOKEN_TO_BE_REPLACED

RE: Why The Web Is Hitting A Wall in BusinessWeek.

The 47-year-old Princeton University grad thinks the Net is largely a waste of time. Assistants print out e-mails for him and researchers give him paper copies of Wall Street analysts reports from the Web.

Gee, you don’t have to browse the internet at all, just as long as you have assistants and researchers to print out every page you need to read. What a simple solution to all this complicated clicking and googling business!

The article does go on to talk about other people who reasonably don’t use the internet either, but some of the reasons are pretty lame. Hatred of email seems to come up a lot. Protip: don’t start your email program — there’s more to the internet than email. Someone else is paranoid that Big Brother is going to steal her privacy. I think someone’s been watching too much local news.

Overcomplication is also a big complaint, which is totally understandable. But then one person says:

“We’ve had so much time to come up with a computer and Internet that are easier to use and work better, but we haven’t done it.”

Um, no we haven’t. The World Wide Web as most people know it only got popular 11 years ago. Graphical user interfaces are really only 20 years old, but computers weren’t even capable of rich color and smooth motion until the last couple years. Compare that with the television — close to 60 years old, or the car — over 100 — the two common comparisons for “easy-to-use” consumer items. Computers will eventually be easy to use, but we’re still in the “adjusting the vertical hold” and “cranking the front of the car” stage of development. I think people mistakenly correlate rapidity of technological development with usability development. One goes as fast as engineers can think up new ways to make things fast, but the other requires longterm study and user testing.

I think internet penetration will continue to slowly rise as old people die, as rural areas get network coverage, and as usability progresses. I don’t know if it’ll ever be near-100% like television, but it could approach that. Television is a one-way medium, and nothing is simpler than sitting on your ass. It’s hard to compete with that. 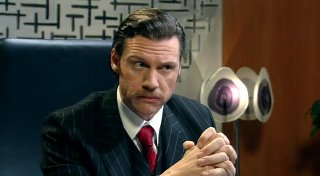 The IT Crowd is a great show on bittorrent Channel 4 in the UK. This is one funny moment among many.