This is my mix for November. Black Cat, White Cat is a crazy, awesome track.

GNOME Shell is an interesting project that is trying to redefine how users interact with their applications, windows, and documents. The project shows a lot of promise, and works quite nicely in practice. While I like the overall design, I dislike the current system for launching common applications. Right now, the “activated” mode of GNOME Shell looks like this:

Nine spaces for commonly-used programs? Not enough. Furthermore, if I just want to launch a program, I have to reveal dozens of UI controls that I’m uninterested in, including the search box, workspace manager, and all sorts of devices, places, and documents.

On my personal GNOME desktop, I have a panel of quick-launch icons on my desktop arranged on the left side of the screen like this:

It’s similar to an OSX Dock — it is normally hidden, but a simple mouse hover anywhere on the left edge of the screen reveals the launchers. This makes it very quick to launch programs. Since the current GNOME Shell design already makes use of the left side of the screen, it should be possible to combine the efficiency of a launcher panel with the power of the full shell. Clicking on the Activities button or moving the mouse to the top left corner of the screen would open the full view like it does now, but hovering on the left edge of the screen would just pop up a panel of application launchers.

I made a very simple mockup based on the one by William Jon McCann:

The launcher panel becomes a sort of sneak-peak of the full view. If you just want to launch a program, just the left edge of the panel slides into view. If you want the rest of the controls, the rest of the UI slides out. With the right animation, this could be a really cool effect.

This mockup is far from perfect. The part that needs the most attention is the full view: 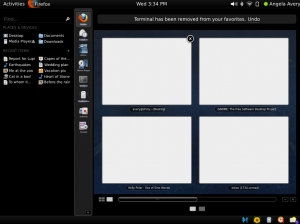 There are a lot of details that are easy to criticize here. The “Applications” heading is quite small, and very crowded. The ugly [+] button at the bottom is an afterthought to provide some way of adding more launchers. The launchers are still too big, especially with the application name text underneath each one.

Despite these layout flaws, I think the concept holds up. In its completely collapsed mode, the slight visible edge of the launcher panel acts as a hint to new users that there is functionality to the left side of the screen. The half-revealed launcher panel is efficient and usable. And the full view provides the screen real estate necessary to customize the more compact view.

Launching programs needs to be super-simple for new users, and super-quick for advanced users. This design satisfies both these requirements. I would also argue that it leads users from familiar territory, a launcher bar, to a new UI concept that’s a little strange at first. Introducing a brand new interface is scary for users, so providing this path would make adoption easier.

Here are the three states for the new shell: