I get the wrong sunglasses in the mail. Hilarity ensues!!!!

When I was in Japan, my Oakley sunglasses broke. I didn’t break them, I swear. They were on my face, and then suddenly something popped and they fell off.
A spring had broken, and one of the arms had fallen off. A few days ago, I (finally) called the company to ask about getting them fixed. They told me to send them over along
with a check, and they’d fix them up. Hurray!

Well, I haven’t sent them off yet, because I’m a slacker. And yet, today I found a package slip in my mailbox from Oakley. Confused, I went to the post office and picked up a package. A package just the right size for glasses! I
wondered if Oakley had decided to send me a new pair of sunglasses as an apology for forcing me to pay them to fix their own damn faulty merchandise.

In fact, they had decided to send me the glasses of a guy named Wayne in
Florida. Thanks guys! I called the number of the optician written on the slip in the package, and told them to let Wayne know he would get his sunglasses, just as soon as they made the journey from Boston, back to Oakley, and on south to Florida. The woman was very thankful, and expressed surprise that I did such an honorable thing.

I was willing to return them and leave it at that, but Char suggested I try them on before I let them go. I think they look right spiffy. 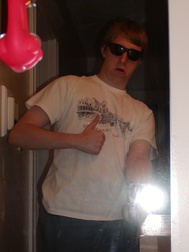 Sorry for the crappy photo, I’m all out of batteries

One thought on “I wish I was, Jackie O’Nassis…”