You want to watch the post season, but you can’t stand the awful, brain-dead commentary. What do you do? Well, if you use linux, you can spend 7 innings out of nine trying to get jack audio to work — which, when it finally does work, does the job well: 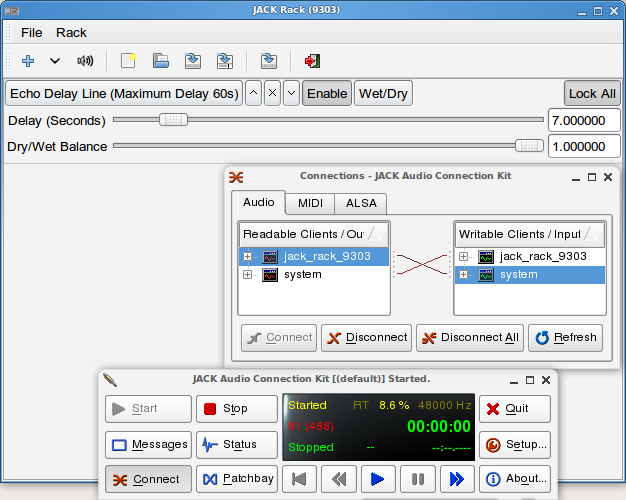 For those who aren’t familiar with JACK, it’s a “professional”-quality audio library that’s designed for low-latency audio routing and mixing. It’s great if you want to easily pipe audio from one application to another. In this case, I want to take the baseball AM radio broadcast, feed it into my laptop, delay it 7 seconds, and then output it.

So, you can see in the “Connections” window (using the program qjackctl) that the system input is tied to a program called jack-rack, and then jack-rack is fed back to the system output. Jack-rack is a program that supports many interesting audio plugins, like echos, flanges, pitch changes… and delays. Here, I have a seven second delay turned on.

And that’s it. All the difficulty with JACK is getting it to work without stuttering or skipping, which required that I install a “realtime”-quality kernel, edit files in /etc/security, and tweak all sorts of stupid options. As I say, it took me 7 innings of Game 6.

But now it’s working, and I can enjoy game 7 with good commentary from the very beginning!

(It occurs to me I should have gotten this working sooner in the season, but I had forgotten just how bad the national announcers were)

edit: Ah yes, why the delay at all? Because the HD feed is delayed by 7 seconds compared to the radio broadcast. I probably should have mentioned that.