Char and I took a weekend trip to New York City last weekend, using the
hip, uber-secret-except-everyone-knows-about-it chinese bus. The idea is, you pay
10 bucks and they take you to New York. Good deal.

I didn’t take many pictures, because I’m lame. I had planned to buy a film camera
at the gigantic B&H Pro photo/video store, but
as two separate people told me later, “they’re all Jews” so it was closed on Saturday.
So I wasn’t able to get a camera.

Our inability to get into B&H was a theme repeated throughout the weekend, as we would try
to find stores and invariably they were closed, in Brooklyn, or otherwise unlocatable.
Eventually we accepted our fate and just went into the stores we could find, but at the
end of the whole thing we felt we were only “moderately successful.”

The part of the trip that went ok was seeing Rent. Like the chinese bus, Rent is
sort of a hip thing to do, although unlike the bus we’re late to the Rent party by about
eight years. The show was pretty good. I don’t see a lot of musicals, so I don’t
have an internal set of standards to go by, but I enjoyed myself. The script is very 90s,
including such memes as: everyone has AIDS! a CYBER-somethingorother! Everyone lives in a loft!
“Living in America at the end of the Millenium!” Somehow we can afford film and processing for
our hip 16mm camera! Something else that probably dampened my enjoyment was that I knew I
would have trouble understanding what was going on, so I was concentrating perhaps a
little too intensely on understanding the lyrics rather than just relaxing. I still
managed to miss a key plot point, but it could have been worse.

Anyway so here is the one good picture I managed to take. 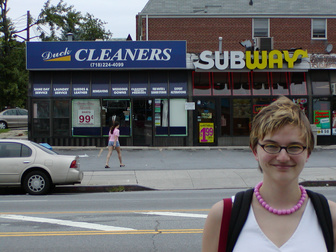